Using CRISPR to block production of HIV in infected cells

Contracting HIV is no longer the death sentence that it was in the 1980s and early 90s. The first cases of AIDS in the United States were reported in 1981, and since then the antiretroviral drugs used to treat HIV have come a long way in both safety and efficacy. HIV-positive individuals who take antiretroviral medications are estimated to have a life expectancy close to the national average, provided they take the medications as prescribed. Without adequate treatment, however, an individual with HIV can be expected to survive an average of about 10 years.

Over 35 million people worldwide are infected with HIV, of which 1.1 million are in the United States. HIV is short for human immunodeficiency virus — a virus that can lead to AIDS if left untreated. AIDS, or acquired immunodeficiency syndrome, is a condition marked by the gradual failure of the immune system which allows for infections and cancers to develop and overwhelm the body’s defenses.

AIDS patients frequently die from pneumonia, tuberculosis, cancers caused by viruses, and other conditions that are normally kept in check by a healthy immune system. HIV can be transmitted sexually or through the sharing of needles and syringes. Less commonly, it can also be passed from mother to baby during pregnancy and childbirth. 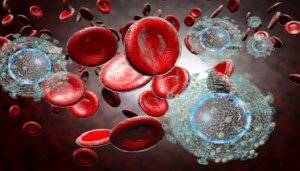 Though HIV antiretroviral drugs are responsible for the much-improved prognoses, only 30% of HIV patients in the U.S. have achieved viral suppression. Since viral suppression indicates that the HIV infection is under control and helps combat the transmission of HIV, this low percentage is worrisome to experts, and is well below UNAIDS’s target of 90% viral suppression.

And antiretroviral drugs are not a cure by any means. They require lifelong adherence or else the patient could risk their particular strain of HIV becoming drug resistant. “As HIV multiplies in the body, the virus sometimes mutates (changes form) and produces variations of itself,” according to the U.S. Department of Health & Human Services. These variations can lead to treatment failure and a dire prognosis for the individual.

HIV antiretroviral medications can cause side effects, such as nausea and vomiting, diarrhea, insomnia, chronic headache and dizziness, fatigue, and so on. These side effects tend to be mild to moderate and often resolve when the patient is prescribed a different antiretroviral drug.

Timothy M. Lankford, 41, of Houston, Texas has been living with HIV since January 2014. “I haven’t really noticed any side effects from taking Complera,” he told the Genetic Literacy Project regarding his daily antiretroviral tablet. “However, when I first started treatment I was prescribed Atripla, and I’m convinced it made my depression worse, which is a known side effect. I was on it for about a year when I asked to change medications.”

Those living with treated HIV also tend to suffer from various age-related complaints much earlier than those who do not have HIV. “I do feel like certain aches and pains I’m experiencing — which have come on rather suddenly over the last year — are related to my diagnosis,” Lankford said.

“There are several ways in which living and aging with HIV are different compared to aging while HIV-negative,” states an article by The Well Project, a non-profit organization focused on supporting women and girls affected by HIV/AIDS. Several health problems associated with the geriatric population appear to happen earlier and faster in people living with HIV, the organization says. This is sometimes referred to as accelerated aging.

HIV infection is marked by low levels of CD4+ T cells, also known as CD4 cells, T-helper cells, or T4 cells. Their role is to send messages to other immune cells that will destroy infectious particles. When CD4+ T cells are depleted below a critical level, cell-mediated immunity is lost and the body is left open to opportunistic infections.

The major obstacle to achieving HIV eradication, the Kobe University researchers said, is that a small portion of CD4+ cells harbor latent HIV even when suppressed by antiretroviral treatment. Their study “demonstrated that the lentiviral delivery of CRISPR/Cas9 successfully reached the isolated proviral genome, cleaved regulatory genes, and significantly inhibited viral replication.” In other words, CRISPR/Cas9 interrupted the key mechanisms that make it possible for an individual to stay infected with HIV.

The researchers did this by targeting tat and rev, two genes responsible for the coding of regulatory proteins that play a crucial role in HIV proliferation. Using CRISPR/Cas9, the team introduced a lentiviral vector into cultured cells and succeeded in significantly lowering the expression and function of Tat and Rev (the protein products of tat and rev).

Best of all, no off-target mutations were found, and the cultured cells’ survival rate was not affected.

Masanori Kameoka, one of the study’s authors, said, “These results show that the CRISPR/Cas9 system, by targeting the regulatory genes of HIV-1, tat and rev, is a promising method for treating HIV infection. […] We hope this research will provide us with useful information in developing a treatment method that can completely cure the HIV-1 infection.”